Compared to other countries, Italy suffers more from the effects of the economic crisis and always has problems balancing some public accounts. Is the euro to blame? Germany’s fault? The fault of the aliens? Let’s see some data to clarify our ideas.

Graphs on debt and gross domestic product and on the trend of public accounts in Italy have already been published. Probably, however, they are not yet sufficient to make us understand the peculiar context in which Italy finds itself; a comparison with other countries may be useful.

Let’s start with the graph on the deficit-to-GDP ratio: 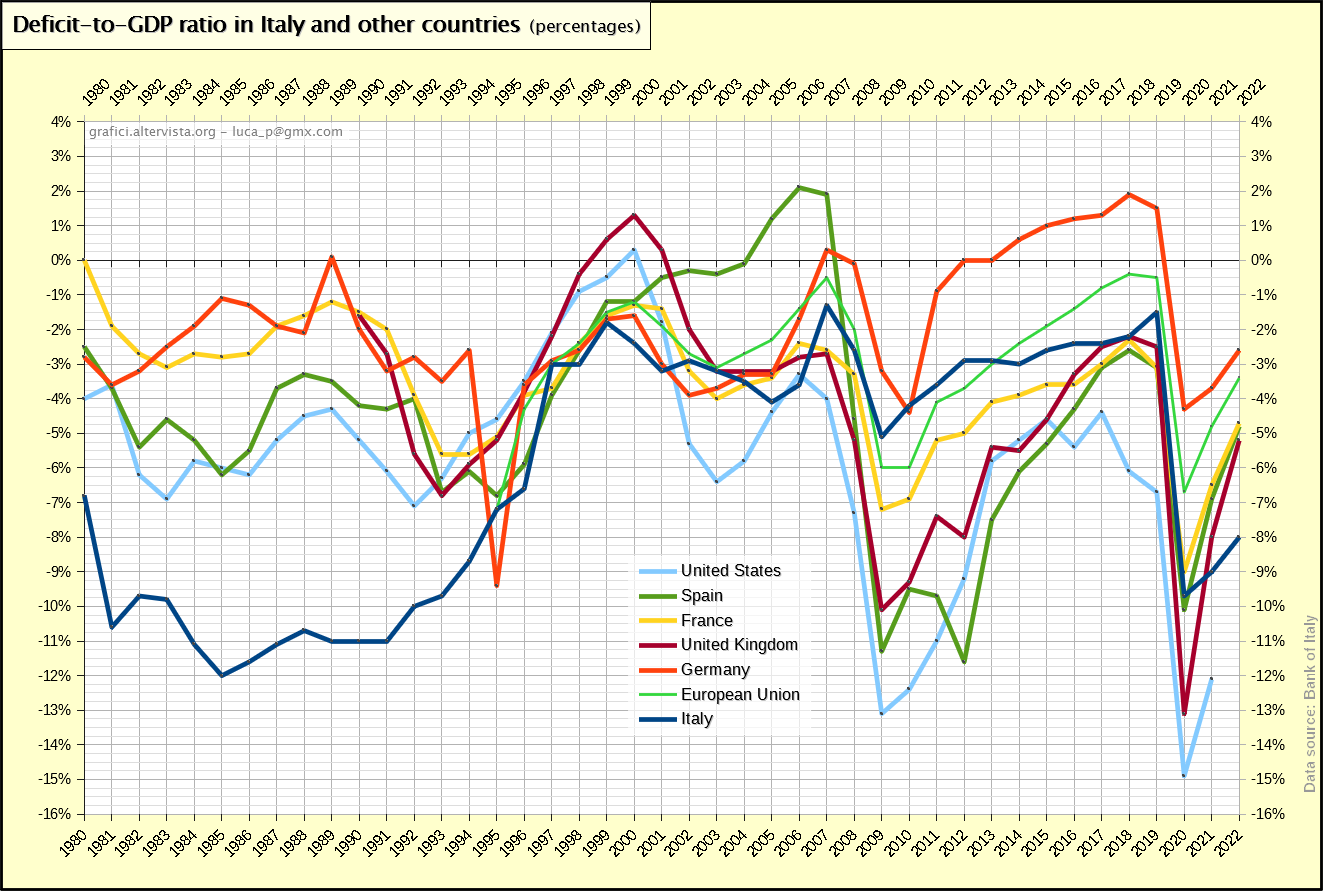 If we divide this graph approximately in half and consider only the most recent part chronologically, we can say that Italy, compared to the others, is a virtuous country in terms of public accounts.

From the mid-1990s until the crisis of 2009, Italy has “remained in the heap”, that is, it has had trends similar to those of most of the countries considered, even though its deficits have always been slightly worse than the European average. It was with the arrival of the crisis that, paradoxically, Italy began to distinguish itself positively; apart from Germany, all the other countries showed much worse values.

Why has Italy been unable to compensate for the negative effects of the crisis by making deficits at the same level as the others? Is there a plot against Italy? Is it the fault of the euro?
No. Just look at the first half of the graph to get the answer.

During the 80’s and early 90’s Italy accumulated a series of scary deficits in complete solitude. As we have seen, making deficits is not strange when it comes to dealing with a crisis. From 2009 onwards, the United States, Spain and the United Kingdom have accumulated 3-4 years of deficits over the 8% threshold. The problem is that Italy has been beyond that threshold for 14 years, moreover in a period in which there have been no serious international economic crises.

Annual deficits turn into increases in public debt, even if for accounting reasons there is not always a perfect match between the two values. We can therefore clearly see the particular situation of Italy by looking at the graph with the debt-to-GDP ratio: 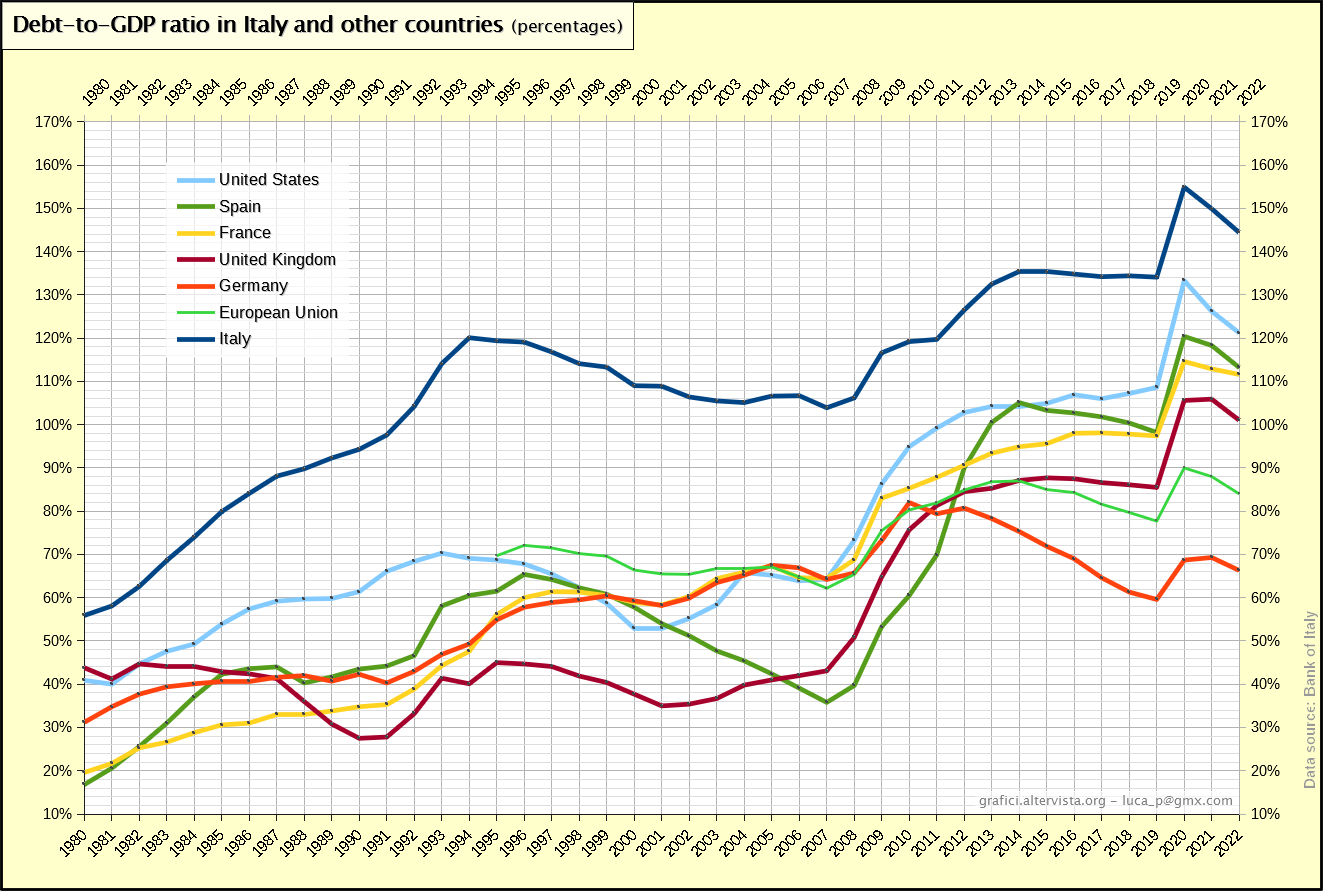 This graph allows us to understand how the debt accumulated more than the other countries during the ’80s and ’90s is then remained on our back for all the following years. It should be noted, moreover, that Italy already had more debt in 1980 than the other countries considered, indicating that a certain worsening of the accounts had started earlier.

The evident period of recovery that began in the mid-1990s has borne fruit and brought us closer to normality (for a more detailed idea of the variables at stake, see the aforementioned graphs on the public accounts).

Then came the 2009 crisis, the so-called subprime mortgage crisis imported from the United States. As said, Italy could not exaggerate in the increase in debt and this has probably depressed our economy more than the others, but in terms of debt-to-GDP ratio this behavior has achieved its goal. In fact, in this period, Italy’s distance from other countries has not increased; on the contrary, it has decreased.

Unfortunately, these precautions were not enough. The worsening of the accounts resulting from the 2009 crisis and the fact that the debt is still high, has subjected Italy and other countries in similar conditions to an increase in government bond rates (also due to speculation processes) that led in 2011 to the so-called spread crisis. The bogeyman for a possible default of Italy (a hypothesis certainly exaggerated) and consequent need to contain public spending led to a decrease in GDP for the next two years. Among the countries considered in the graph, this time it was an economic crisis only in Italy and Spain (the latter for different reasons).

Italy’s debt-to-GDP ratio rose to record highs and distances from other countries (with the exception of Spain) increased slightly again. If the deficit had not been kept at virtuous levels, things would have been worse.

In recent years the value of Italy is almost stable, with a slight decrease in the period 2015-17 and a slightly more marked increase in 2018. In 2019 the value remained stable.

As can be seen, at this stage the distance from the other countries considered tends to grow for Spain and especially Germany, while it decreases or remains constant for the United Kingdom, the United States and France.

It should be remembered that the Stability and Growth Pact envisages not exceeding a deficit/GDP of 3% and a debt/GDP of 60%. However, these are not the only parameters considered. The structural deficit also plays an important role.

Data are taken from the statistical database of the Bank of Italy section “Topics; Public Finance Statistic in the European Union” by selecting the items “Net borrowing/lending” and “Gross public debt”. In addition to European countries, the data from the United States is also reported.

It should be noted that previously for the United States was used a source that reported only federal deficits/debts and not those of total state. This error was corrected using data from the Bank of Italy.