These are the two main new renewable sources; let’s see how much space they have managed to gain in the electricity system of the countries that have decided to use them more.

Analysing the share of production achieved by sources such as wind and photovoltaic is particularly interesting. In fact, these are two non-programmable and intermittent sources, that is, they are characterised by the impossibility of adapting production to the trend in electricity consumption and by intense and short-term variations.

This is no small defect because the reliability of the electrical system is based on a precise balance between the demand for energy required on the grid and that fed in by the production plants. On this depends the stability of the voltage and frequency values of the electricity which, if they vary too much, may require the interruption of the supply, causing the typical blackout.

For this reason it was considered for a long time that wind and photovoltaic had serious limits to their use. These are the so-called limits to the penetration of intermittent renewables, determined in terms of the maximum power that can be installed in a country to preserve grid safety conditions. Obviously, the amount of energy produced depends on the installed power.

Having said that, let’s see which countries have gone further in the use of these two sources. To make the data more significant, only countries with an electricity production of at least 50 TWh were considered. Let’s start with wind power: 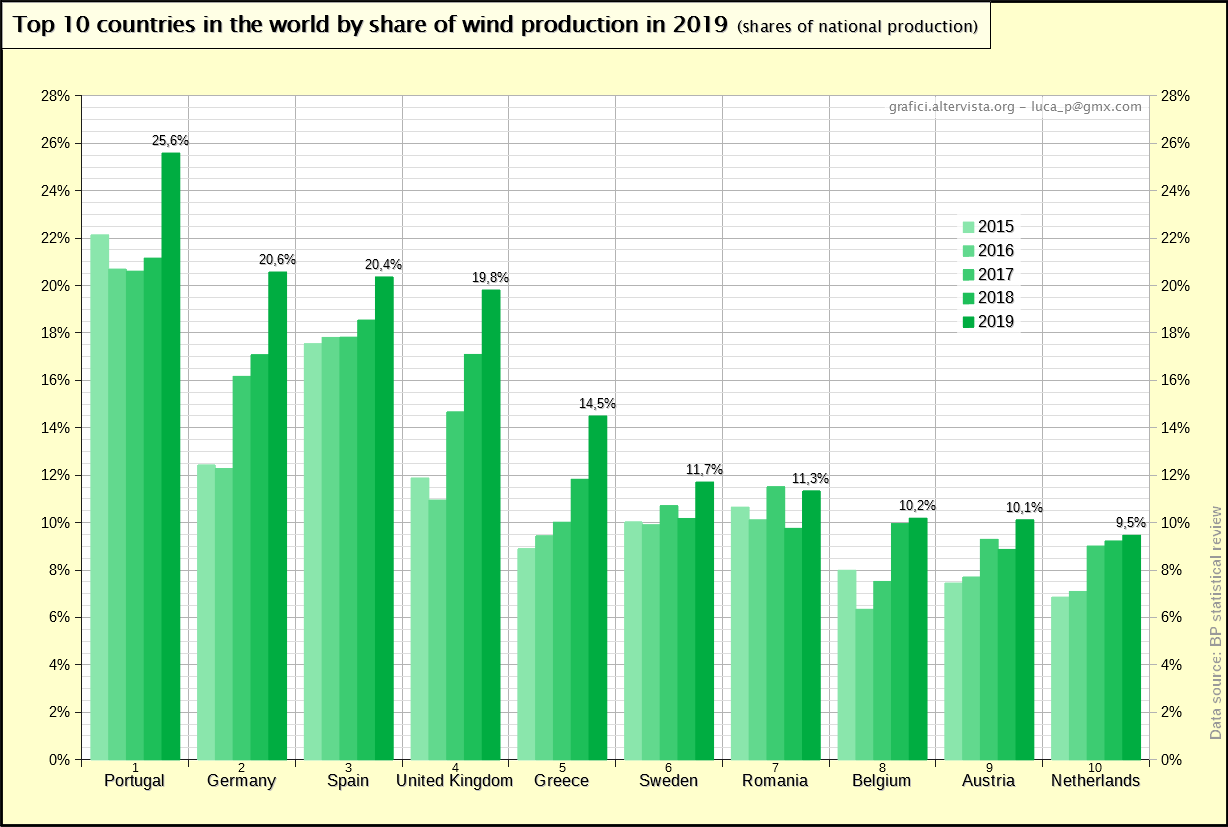 You can immediately see a total domination of the European countries (and of the European Union). In addition, the values are significant overall, indicating that wind power is a more mature technology than photovoltaic, with greater installed historical power and better productivity in much of Europe.

As you can see, Portugal is clearly in the lead thanks to a strong growth in 2019 after several years of substantial stagnation. Among the other countries there is a steady growth trend particularly for Germany, the United Kingdom and Greece.

It should be remembered that wind and solar production is characterized by a certain annual variability, i.e. some years may be windy or sunny than others. This can cause the percentage to vary regardless of the actual variations in installed power. The trend of consumption (and therefore of total national production) can also influence the percentage of penetration. The trend over five years is certainly a more reliable indicator of the actual development of these sources.

Italy is excluded from this graph as it has a 7.1% share.

Let’s see now the photovoltaic, or better, the solar, being also included the production of thermal concentrated solar plant (CSP), but that is insignificant: 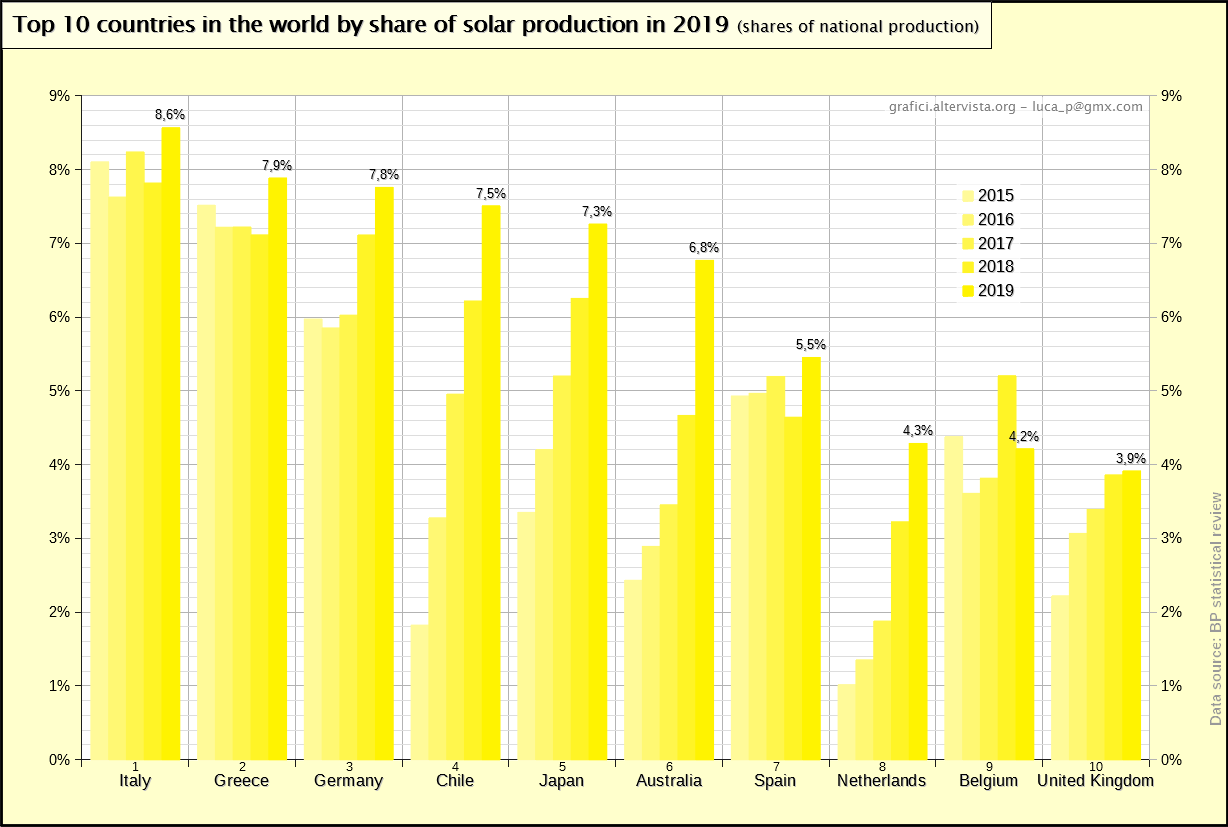 Here the situation is geographically more balanced and all the continents are represented, even if it remains an European prevalence.

The range of values is also more continuous and balanced. This time Italy takes first place but, as you can see, the share has grown slowly in the last 5 years. Countries such as Germany, Japan, Chile and Australia are increasing their share at a remarkable pace and it is not excluded that they can reach and exceed us.

It should be noted that in this ranking there are four countries (Germany, Netherlands, Belgium and United Kingdom) that can certainly not be considered among those rich in sunshine, which is quite unusual and can make many believe that it’s a waste of resources. In reality, these values indicate that photovoltaics enjoys a certain versatility with regard to low levels of radiation; concentrating solar energy suffers much more.

Finally, let’s see the ranking of the countries that have the largest share of wind and solar combined: 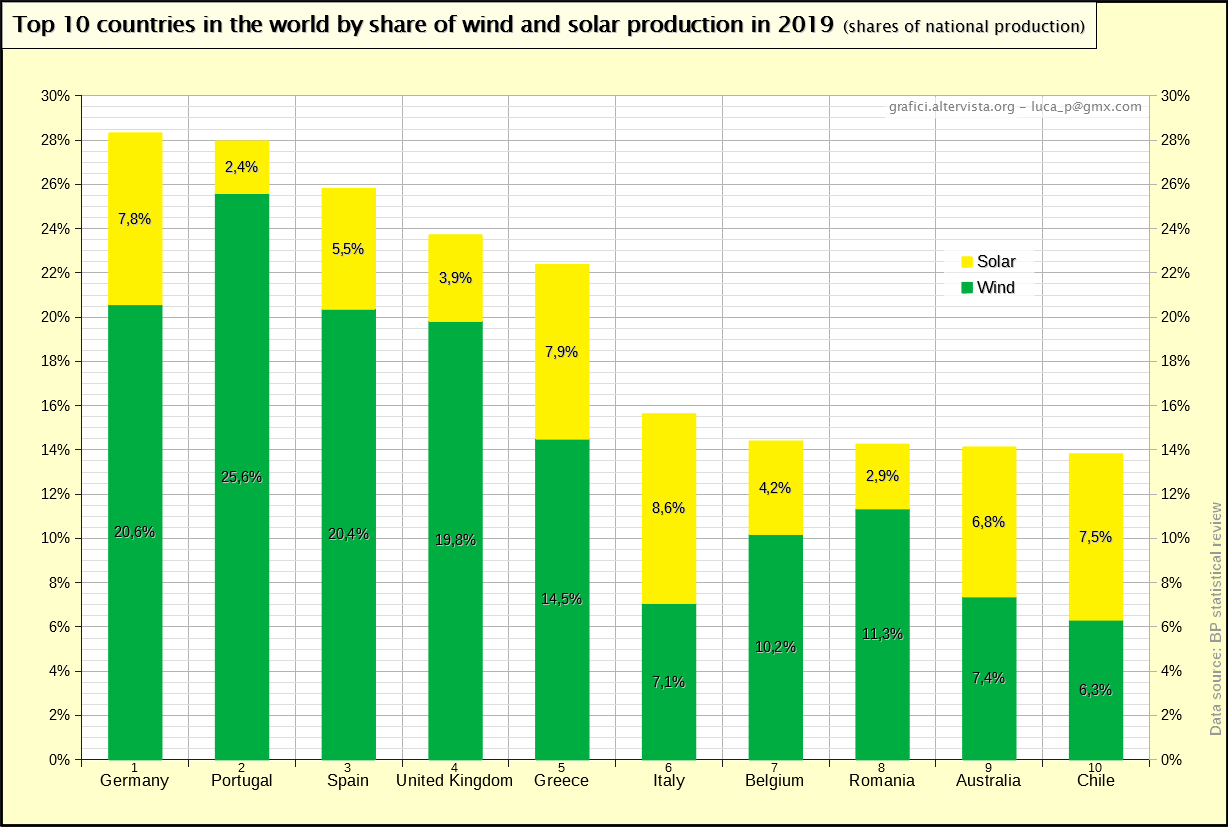 As mentioned above, wind power is more widespread, so it has a major influence on this ranking, which is in fact once again dominated by European countries, with the presence of Chile only in tenth place. Photovoltaic is still growing very much and it is likely that in the near future things will be more balanced.

Italy, thanks mainly to the photovoltaic share, manages to enter the ranking in sixth place, improving a position to the detriment of Belgium. Moreover, together with Chile, it is the only country among those in the ranking to have a greater share of solar energy than wind power.

As you can see, the largest share of intermittent sources is reached by Germany with 28.3%.

The old graphs are visible here: