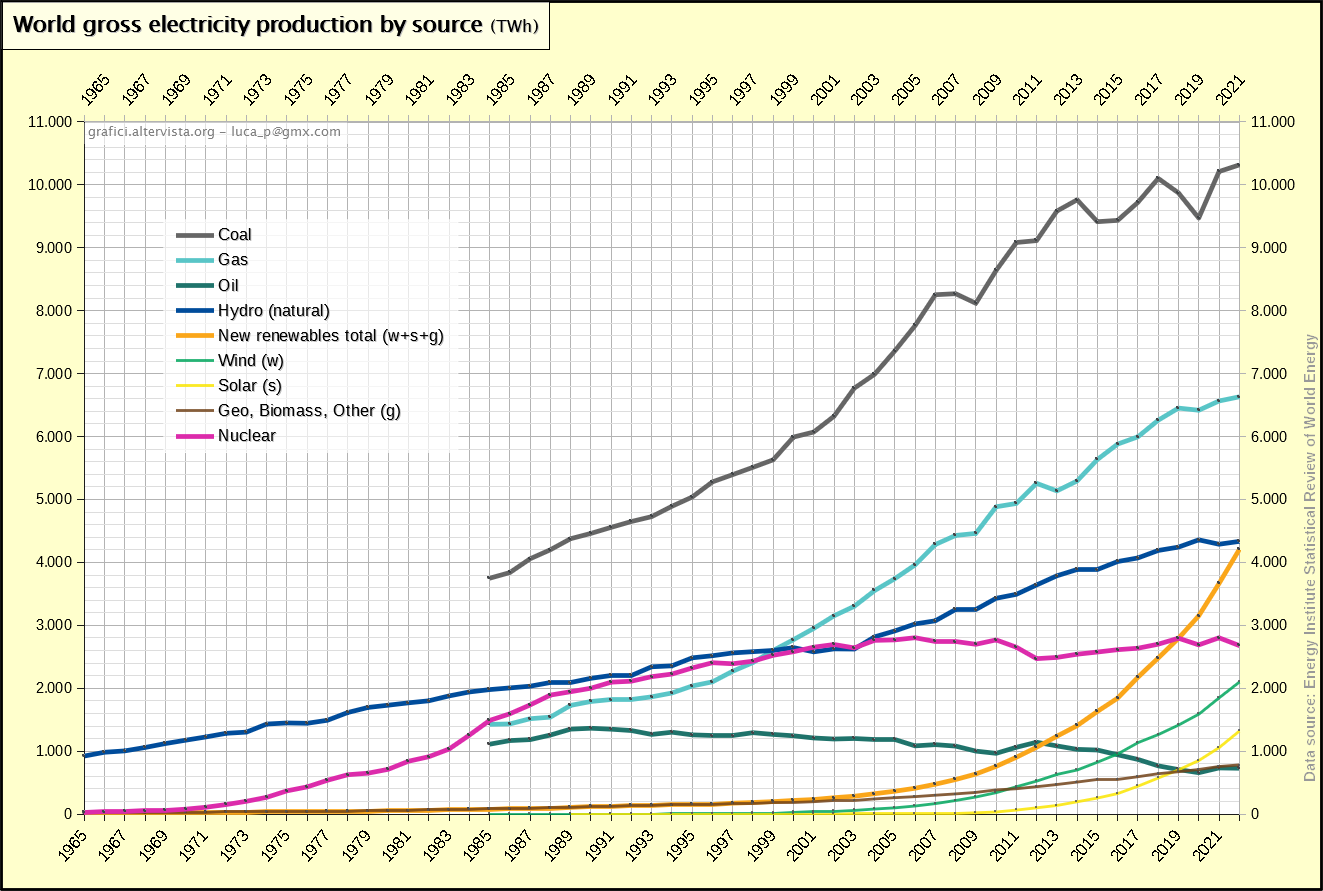 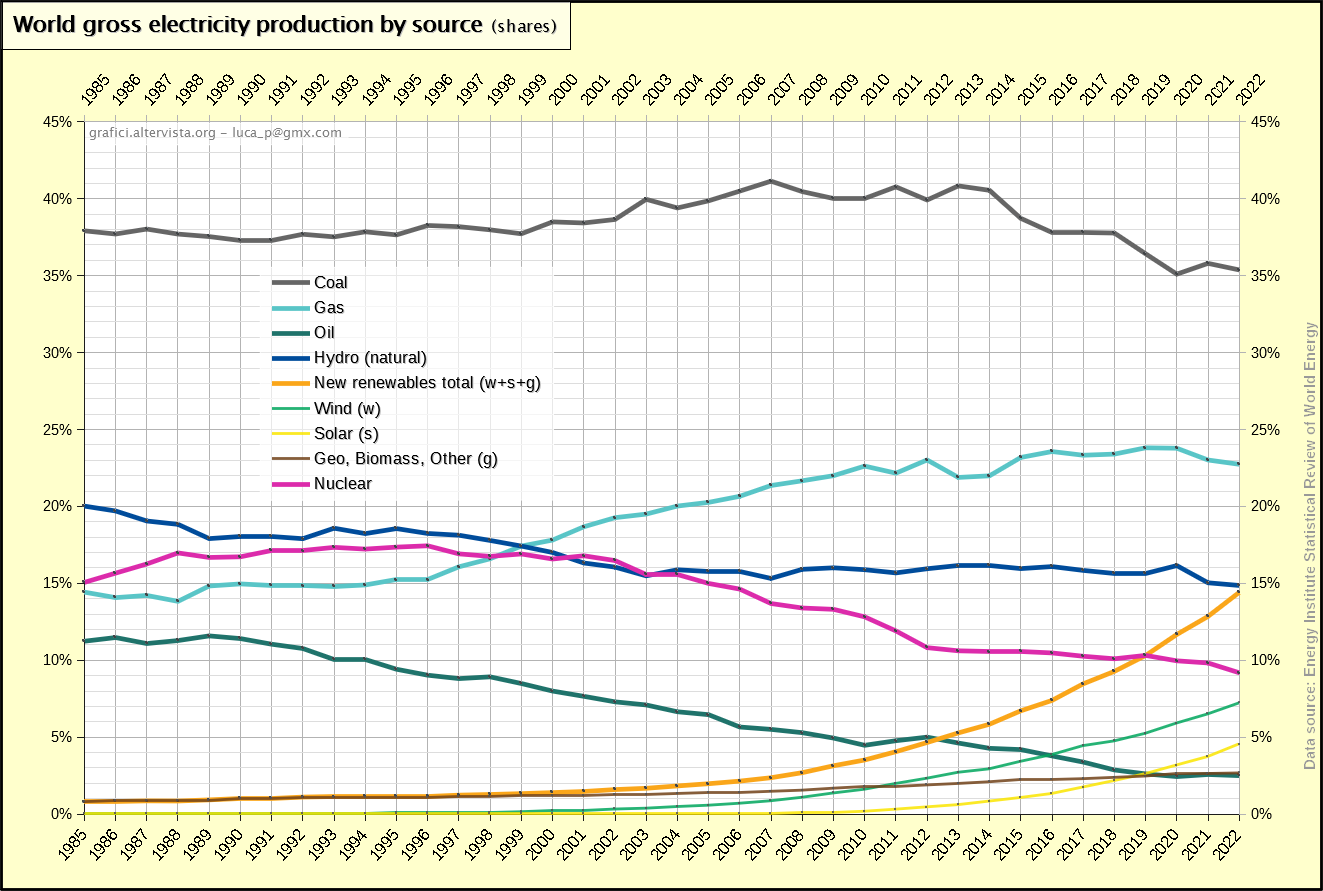 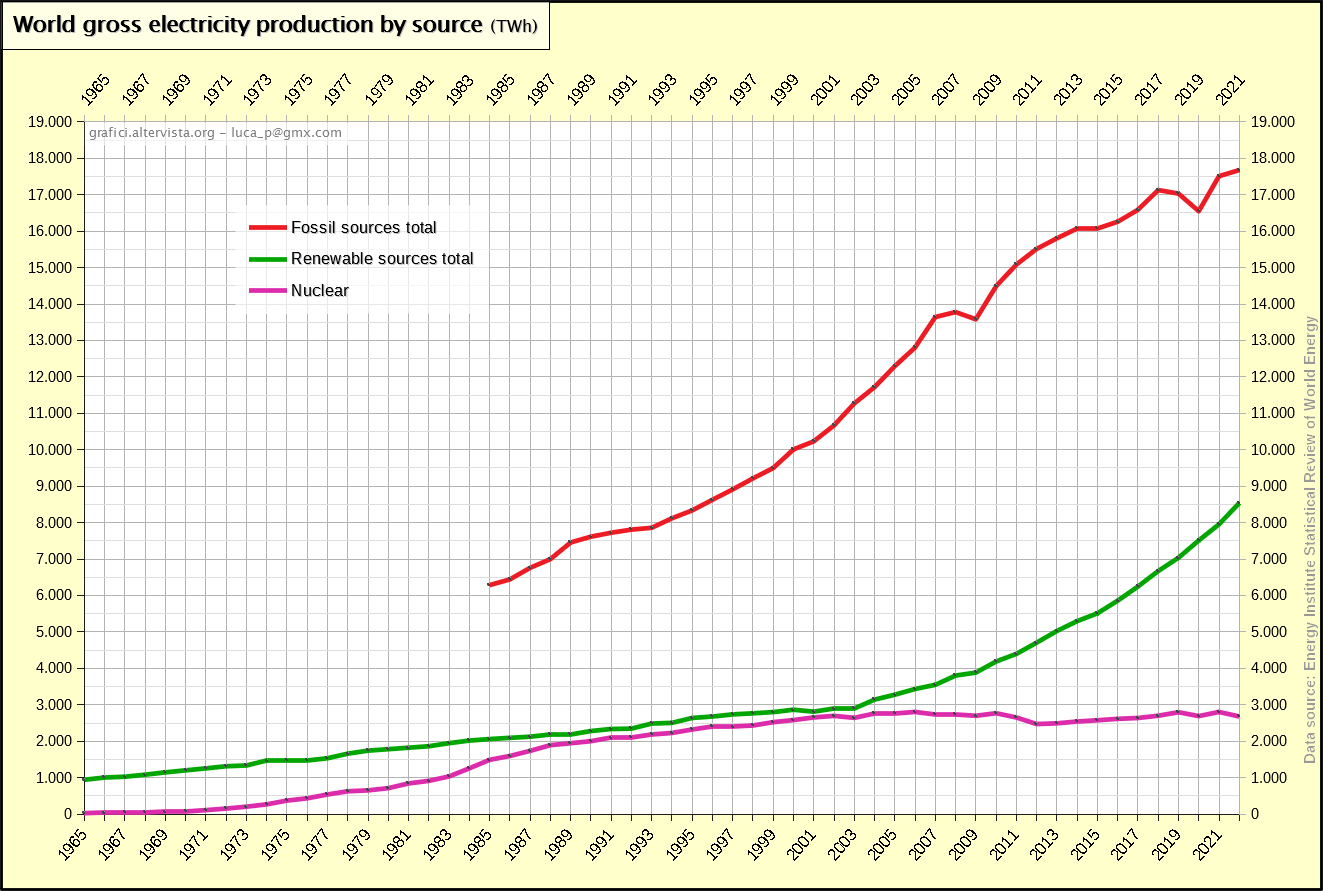 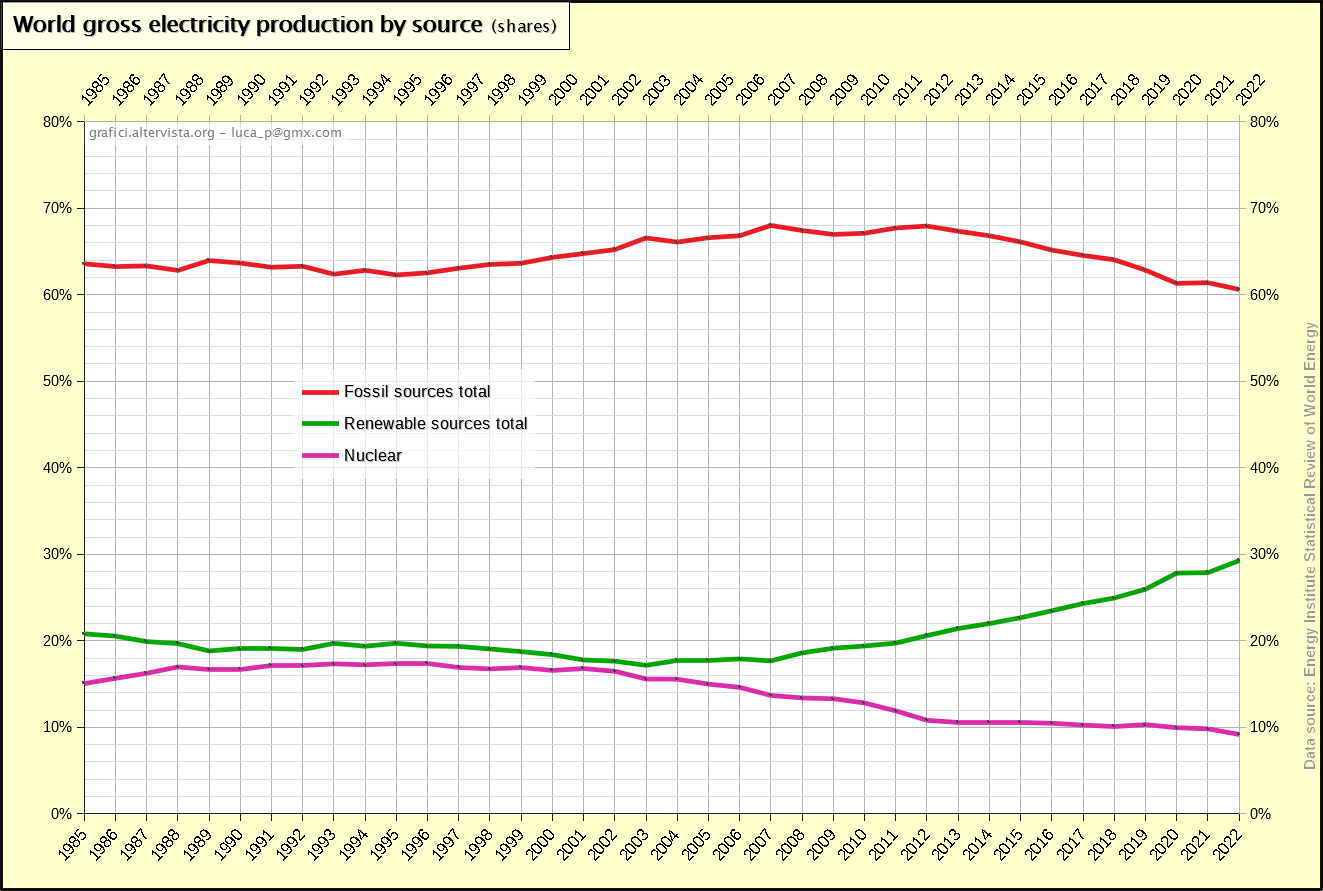 As you can see, coal plays the biggest role in the world’s electricity production. In absolute terms has consolidated its leadership over time, although since 2008 the tendency to grow is less pronounced than in the previous decade. The effect of this slowdown can be seen in the relative values, where coal rose from a peak of 41.2% in 2007 to 36.4% in 2019 (which is also the minimum share reached in the period considered). Production in 2019 is 9,824 TWh.

The only fossil source that has seen its market share expand in recent decades is natural gas (23.3% in 2019), which has started to grow more strongly since 1997. Again, there is a certain downward trend since 2008 compared to the previous decade. In 2019 production is 6,298 TWh.

Although the data here do not fully show it, oil has had its period of growth since the ’60s and then began to be replaced by natural gas during the ’90s.

Natural hydro (i.e. excluding pumping) has long been the only alternative source to fossil fuels. It has grown continuously but not particularly strongly. Since 2004, there has been a certain acceleration, even if it is just enough to keep the percentage share constant. In 2019 it covers 15.6% of production with 4,222 TWh.

Nuclear power was the first attempt to find a new alternative source to fossil fuels. As you can see, starting from practically zero in the 70s, it has had a phase of growth for the next thirty years, more sustained during the 80s. By the early 1990s, however, the installation of new reactors had already been considerably reduced and the growth in production was largely due to the upgrade of old plants, especially in the United States.

The sharp slowdown in the opening of new power plants and the beginning of the closure of the older ones led to a substantial stalemate in production from 2004, which then turned into a real decrease in 2011-12 following the Fukushima events in Japan.

Since 2013, production has been growing again, both because of the gradual reopening of Japanese power plants and because of a particular China activity in the sector. However, production is still just below the peak reached in 2006 (2,804 TWh) and in relative terms the percentage share continues to fall even since 1996, when it reached 17.6%. In 2019 production was 2,796 TWh, with a share of 10.4%, slightly up from the previous year.

The new attempt to find alternative sources to fossil fuels is represented by other renewables, that is, the set of new renewable sources (wind, biomass, photovoltaics, plus other minor ones) and a proven source such as geothermal.

As you can see, other renewables are growing at a fast rate. This growth is already higher than that of nuclear power in the golden age and probably it’s destined in the near future to exceed that of gas and coal seen in the 90s and 2000.

The slowdown in coal and natural gas in the last ten years mentioned above is largely caused by the growth of other renewables, as well as by a certain slowdown in total production after the 2008-9 crisis.

Overall, by grouping sources in macro categories, it can be seen that the sector is still dominated by fossil fuel-based thermoelectric sources, which together account for 63.6% in 2019. However, the trend in the percentage share shows a continuous downward trend since 2013. The drop in production in absolute terms in 2019 is also important, because (unlike the drop in 2008-9) it is not associated with any particular global economic crisis.

Although fossil fuels remain far away and unachievable with current trends, renewables are growing at a fast and slightly exponential rate.

In order to highlight the trend of the various sources over time, it is possible to graph the annual variations: 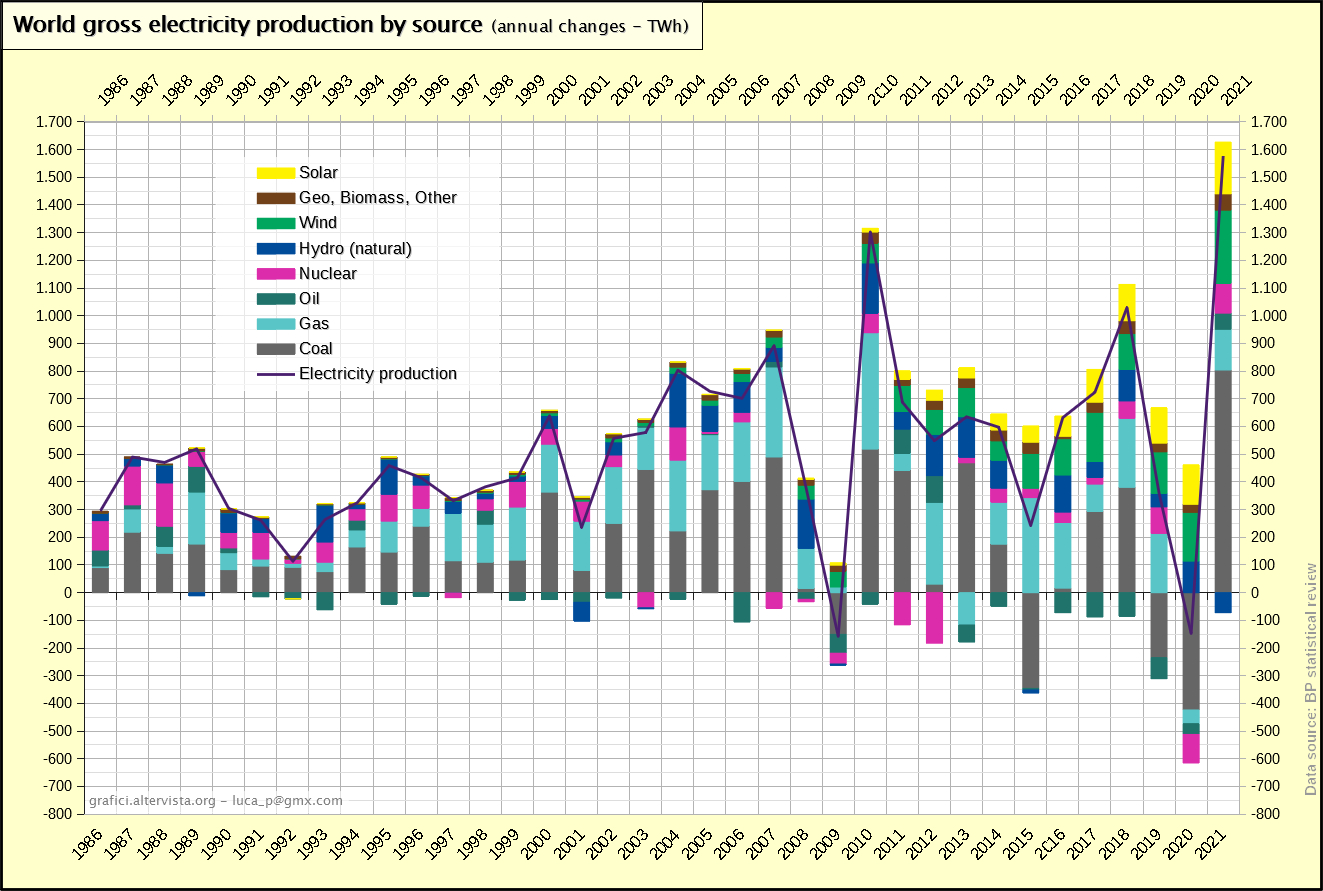 Even if it is only partly represented here, it is clear that the growth of nuclear energy has weakened since the 1980s, that there has been a strong growth in fossil fuels since the early 2000s and that new renewable energy sources have burst onto the scene in recent years.

Finally, here is the graph with the trend of world electricity production as a whole: 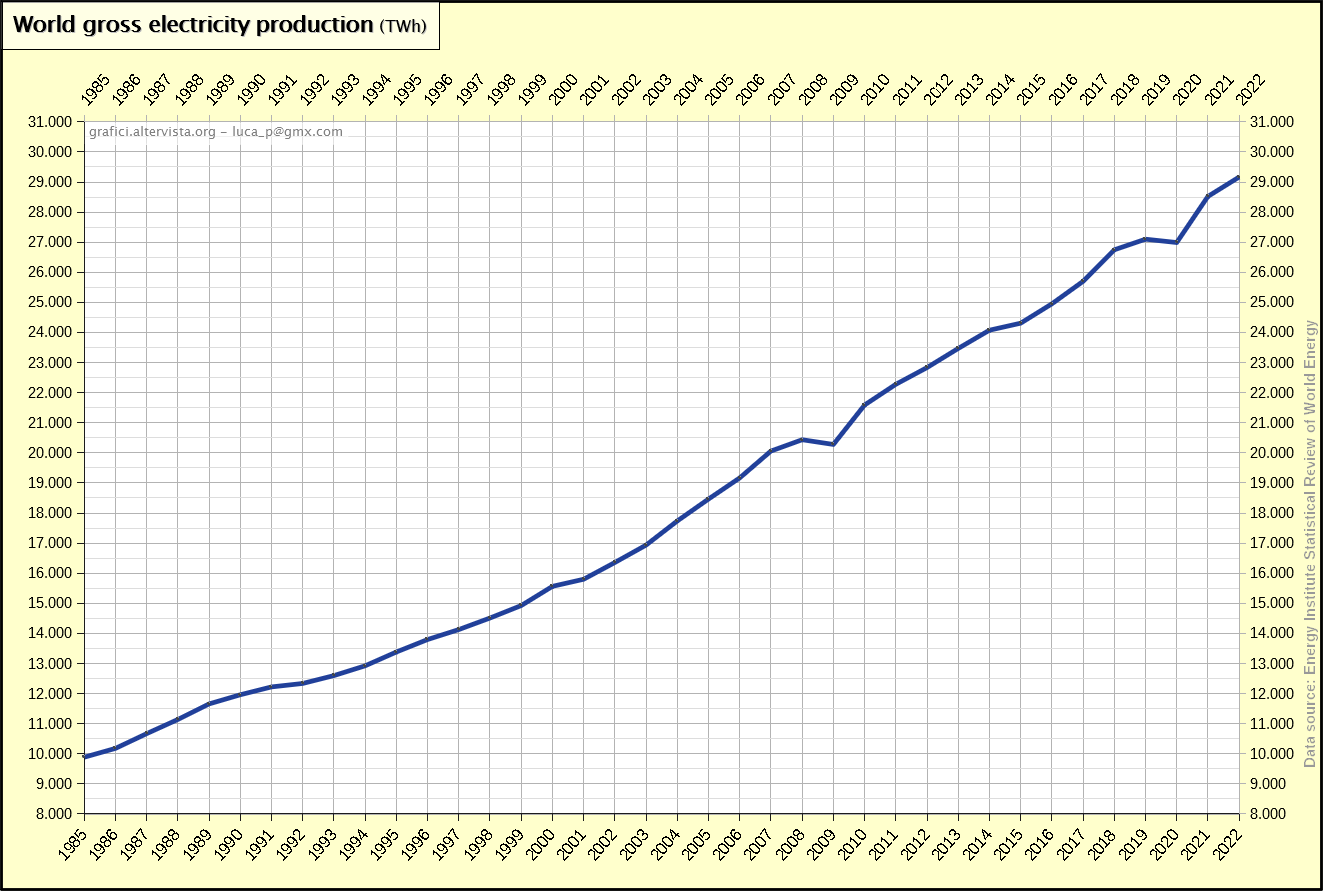 Let us now look at the situation in the European Union:

As you can see, the situation in Europe is much more dynamic than in the global context. After all, the old continent does not have large local fossil fuel resources to draw on, so there was a greater need to develop alternative sources.

Nuclear power has really developed rapidly and considerably, so that it has reached and exceeded coal, becoming the first source of production. Contrary to what has been seen globally, however, nuclear power in the Union has been on a clear downward trend since 2005, i.e. even before the Fukushima accident in 2011, although this event has certainly helped the descent with the early closure of some power plants.

The use of coal was still very important in the mid-1980s, even with a higher share than the global one. The use of this source, however, has gone down continuously in function of a replacement over time with nuclear, natural gas and finally with other renewables.

Until the early 1990s, the use of natural gas in the EU was significantly lower than in the rest of the world. Then, in 1993, it was decided to focus more on this fuel (less polluting than coal) and a phase of growth began which has rebalanced the situation.

It is worth noting the abrupt step backwards from 2009 to 2014 caused by the drop in consumption and the rapid and unexpected growth of other renewables. Power plants using natural gas have been hit harder because they operate more flexibly than power plants such as coal and nuclear power. Since 2015, the use of this fuel has returned to growth thanks to the recovery in consumption and the fact that the plants have adapted to compete with the most rigid sources.

Hydro and oil have performed very similarly to what has already been seen at a global level, while the role played by other renewables is decidedly different. As we can see, in the European Union there has been a great deal of progress in this sector, so that in a few years it could even become the first source of production.

Among other renewables, wind power is the most important source. and In 2017 for the first time exceeded natural hydropower and next year will probably exceed coal.

Overall, fossil sources in the European Union have been showing a clear downward trend since 2008, which, as we have seen, is still not visible globally. It is even probable that within a year or two renewable sources will outstrip fossil fuels, thanks in part to nuclear power, whose production is still significant in terms of numbers.

Let’s see also in this case the graph with the annual variations:

Compared to the graph with the global situation, there are more marked changes. New renewables, also due to a certain reduction in consumption, are not limited to flanking fossil fuels and nuclear power, but tend to replace them.

Finally, here is the graph with the total gross production: